On Monday, November 11, 1918, World War I came to an end. Wrought from militarism, nationalism and imperialism, the Great War broke empires, challenged established gender and race relations, and destroyed millions of lives. Mail became the critical link for the families separated and desperate for news. Governments responded to these developments and the disruption of communication networks, and struggled to determine who should be able to communicate with whom and about what.

Deadlines for proposals:
One-page proposal and CV due June 15, 2017. In addition to a one-page proposal, each individual should submit a one-page curriculum vitae with contact information (e-mail, phone, address).

Send proposals or questions to: NPMResearchChair@si.edu

Notification of acceptance will be mailed on or about August 1, 2017.

Papers due by September 1, 2018. Accepted proposals must result in papers of 4500-5500 words, including bibliographic material, citations, and image titles. The articles must be formatted according to the guidelines of the Smithsonian Institution Scholarly Press. Images should be placed and discussed within the text and image permissions must be acquired. Writers will have the opportunity to revise their papers after the symposium and before the papers are considered for publication.

For more information on formatting and permissions, please see the call for papers for 2018 at http://postalmuseum.si.edu/research/symposiums-and-lectures/

The First World War swept nations around the globe into conflict. Many of these generated what is called an “expeditionary force,” the most famous of which are perhaps the British Expeditionary Force (BEF) and the American Expeditionary Forces (AEF). But there were no fewer than seventeen sets of military forces serving in an “expeditionary” mode. These ranged from Turkish troops fighting on the Eastern Front to Russians and Portuguese on the Western Front, from the British in Mesopotamia to Germans in Macedonia, and include the Australian Naval and Military Expedition to German New Guinea and the American North Russia Expeditionary Force in 1918-1919. Their formation and designation, military deployment, political and military status, coordination with other military units, relations with the civilian population, disposition, combat and eventual return homeward to disbandenment raise a host of questions.

The classic definition of an “expeditionary force” is quite straightforward: a military force sent to fight in a foreign country. During the War, most countries aside from those within the British Empire used a conscription approach to military manpower. They also, however, used such an approach to the labor auxiliaries to the combat troops, so a natural question is whether the conscripted labor “troops” (as they were often designated) were also in some significant sense “expeditionary.” The term expeditionary is usually distinguished from troops that were “advisory” or “liaison” in nature. But where were the boundaries between these designations? Were they a matter of the mission, the political status of the troops, the size of the forces? Generals Liman von Sanders and von der Goltz commanded Turkish troops in combat operations. How should they and other Germans serving in Turkey be viewed?

These historical questions have analogs in other conflicts. Aside from the long prior practice of sending troops abroad, the designation played a role in World War II and was used by some countries in the Korean conflict. It was used by the French in Indochina, but not by the Americans in the Vietnam War. The term was not used for the Gulf War of 1990-91 or the conflict in Iraq starting 2003, arguably also expeditionary in nature, but it has today explicitly been invoked by the American Department of Defense to describe the American forces fighting ISIL in the Middle East.

Our goal is to establish a symposium/workshop for discussion of the issues surrounding force projected in the expeditionary mode primarily in the First World War, with an eye to sparking a larger discussion and publications on the subject in the coming two years. We would like you to consider joining us at Knox College in Galesburg, Illinois, on 1 April 2017. A select number of participants will be funded, and proposals will be evaluated beginning 3 January 2017. For further information, contact esencer@knox.edu.

A 1-day Symposium to be held in the Centre for the Study of Modern Conflict at the University of Edinburgh, United Kingdom on Saturday 18th March 2017

During the First World War a number of ex-services organisations arose in the UK, run by the men themselves, motivated by poor administration of war pensions and other allowances, and radical enough to rattle the Government. Other veterans, male and female, chose non-political activities, such as the church, trade, education or agriculture, while still others just wanted to shed their service identities altogether. This symposium is designed as an encompassing event to explore the experiences of veterans and their dependents during and after the conflict, and to investigate how military service influenced their subsequent lives. While it focuses primarily on the UK, the organisers are also keen to attract papers about the experiences of veterans in other countries.

Proposals for 15-minute individual papers are invited. Joint proposals for panels or workshops will also be considered. Abstracts of 250 words should be accompanied by your name, institutional affiliation (if applicable) and a brief biographical statement (100 words).

Submissions are welcome from established and emerging academics (postgraduate and early career researchers are particularly encouraged), independent researchers, community projects, organisations/associations, and any other interested parties who relate to the theme of the symposium. Please make all submissions through the dedicated website at https://whattommydidnext.submittable.com/submit. Deadline: 30 November 2016.

Potential paper topics may include, but are certainly not limited to:
• Ex-service organisations during and after the FWW, including the Association of Discharged Sailors and Soldiers (DSS), The Federation of DSS, The Comrades of the Great War, The National Union of Ex-Servicemen, The British Legion
• Ex-service issues in post-war society(ies)
• The involvement of veterans in politics
• State responses/reactions to ex-servicemen/women
• Non-State responses/reactions to ex-servicemen/women
• Disabled Veterans
• Ex-servicewomen and Ex-Servicewomen’s Associations
• Veteran engagement with the Church or religion
• Veterans and Violence, Disorder and Discontent
• Veterans and Radicalism
• Veteran identities
• Comparative experiences of veterans in different belligerent countries
• Commemoration, Memory and Veterans

The language of the conference is English, and all speakers will be expected to deliver their papers in English. Request to join the mailing list, and any other enquiries, to Mike Hally. Further information will be posted on the event website.

Professor Gary Sheffield will be talking about his new biography, The Chief: Douglas Haig and the British Army.

Globalizing and Localizing the Great War: A tale of four cities

Rejecting the traditional focus on national histories, this lecture tells the story of the First World War in terms of interconnected global histories, explored through a series of towns and cities. Oxford in the UK, Halifax in Nova Scotia, Jerusalem in Palestine and Verdun in Eastern France illustrate how the world and the war interacted in flows of materials, people, ideas and images. 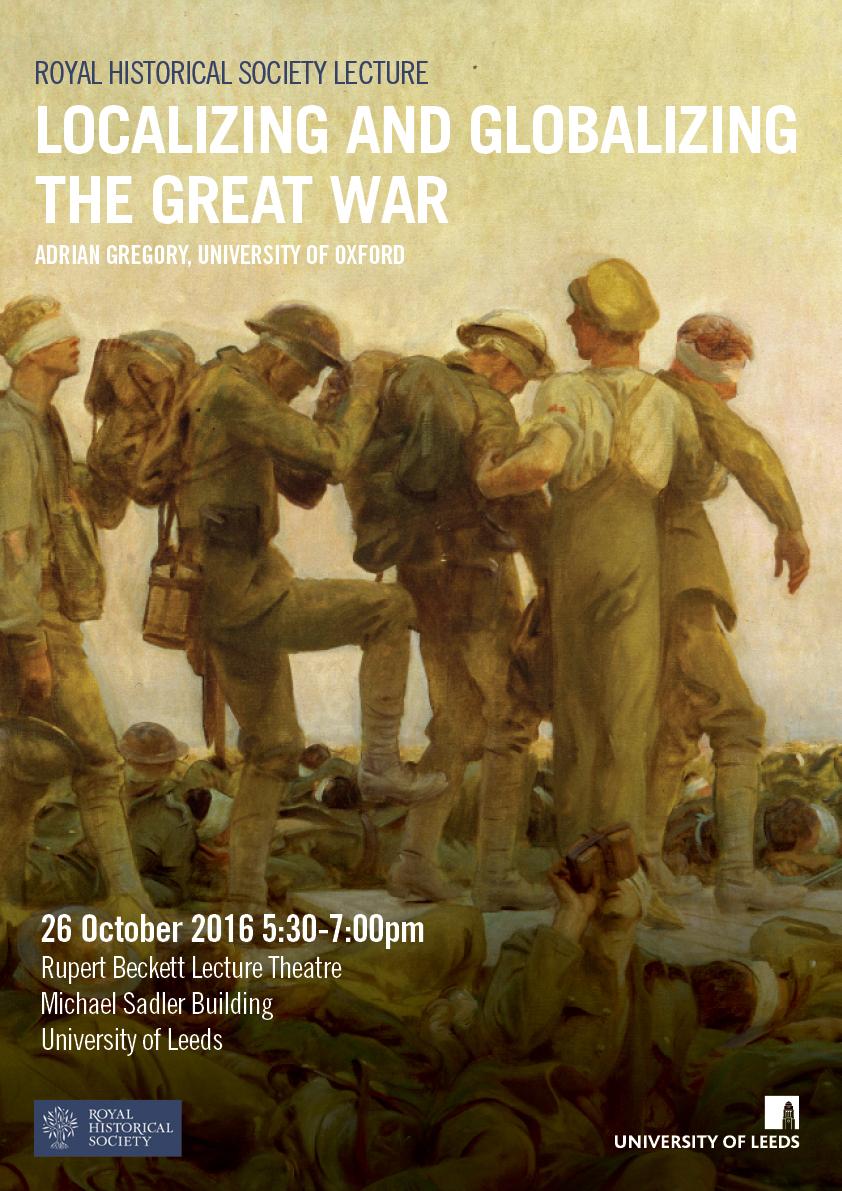 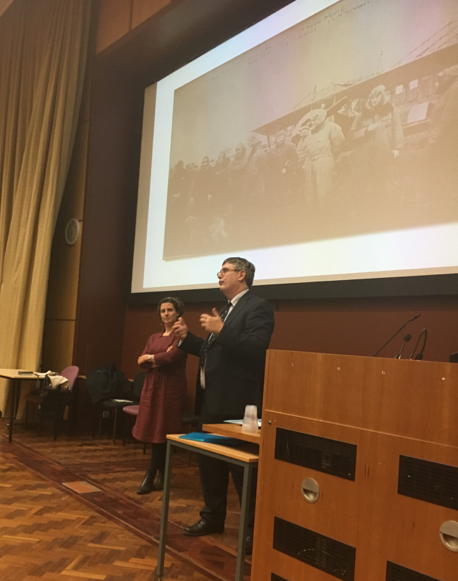 We invite proposals for papers presenting new and original research on all aspects of economic warfare and the sea between 1650 and 1950, for a conference to be held in Oxford in July 2017. As in the successful 2014 conference ‘Strategy and the Sea’: An International Conference in Honour of Professor John B. Hattendorf, we seek once again to bring together research students and early career scholars, established academics, and serving personnel, in the study of naval history.

Economic warfare is central to the exercise of sea power, and has influenced the conduct and outcome of armed conflicts, the diplomacy of great powers, and trade and politics all over the world. From commerce-raiding in European, Atlantic, and Asian waters during the seventeenth century, to submarine campaigns in the twentieth century, economic warfare has been pursued with many different objectives, methods, and results. This conference seeks to examine the role and consequence of economic warfare at sea from the early modern period to the Second World War, and to connect naval history with broader themes in economic and diplomatic history. Papers which take a long chronological view of this topic are particularly encouraged, as are those which explore or compare multiple regions of the globe.

Proposals should be no more than 300 words in length, accompanied by a one-page CV, and sent to the organisers at: oxfordnavalhistoryconference@gmail.com. Successful applicants invited to speak at the conference will be given twenty minutes to present their research, with time for questions. The deadline for proposals is 15th January 2017.

On 18th November 2016, to mark the 100-year anniversary of the end of the Battle of the Somme, Academic IT are creating an online (Twitter) memorial to those from the University who died in action or from wounds fighting on the Somme in July-November 1916. This forms part of the University’s First World War Centenary Programme and we need your help!

The memorial will be based on the names listed in the University’s Roll of Service. Although the Roll can tell us key details about the many men who gave up their lives, for various reasons it is not exhaustive. Therefore, we are calling out to all college, library and faculty staff who might be able to help us ‘fill in these gaps’. We are looking for information about:
* the Oxford students from Germany or other Central Powers,
* the Oxford students from the Allies, and
* the members of staff who were not matriculated at the University.