A talk by Philip Geddes

“What comfort can I find ?” was the anguished question asked by the writer Rudyard Kipling after the death of his only son Jack at the Battle of Loos in the autumn of 1915. Kipling provided his own brutally realistic answer – “none this tide, nor any tide”. Kipling responded to his loss by becoming the unofficial voice of the people of Britain and its Empire. He wrote many of the words by which we now remember the dead of the Great War – striking phrases such as “Lest we forget” and “A Soldier of the Great War Known unto God.”

An Evening with Rudyard Kipling tells the story of Kipling’s life with readings from his poetry and prose. It takes Kipling from his early days as the chronicler of Britain’s Indian Raj, through to his high point as poet of Empire for Edwardian England and as voice of the nation in the First World War. The show includes many Kipling favourites – “If”, regularly voted Britain’s favourite poem, and extracts from Plain Tales from the Hills and the Just So stories.

About Philip Geddes
Philip Geddes is ‘a child of the Empire’ and a long standing Kipling fan. His family served in India for almost 200 years in the army and as political officers. He was a journalist for 30 years with the BBC, ITV and The Financial Times (as European Editor for Financial Times Television). He then spent 15 years as a consultant to European Commission, advising senior level officials on the development and presentation of policy. He has written for numerous magazines and newspapers, and is author of two books – In the Mouth of the Dragon, on the future of Hong Kong and Inside The Bank of England, the first modern study of the Bank of England.

For further information and to book, see here.

The Quick and the Dead: Fallen Soldiers and their Families

This interactive day will draw on the extensive experience of bestselling author and well-known historian of the Great War, Richard van Emden.

It will cover many aspects of non-fiction writing from clarifying what sort of book you want to write, how to build a narrative and getting published. It’s suitable for anyone, published or aspiring, who’s writing or wanting to write about the First World War.

Cost: £65 (including tea/coffee and lunch) or £60 for Western Front Association members.

For more information contact: hss-shortcourses@brookes.ac.uk
Further information and how to book, see here. 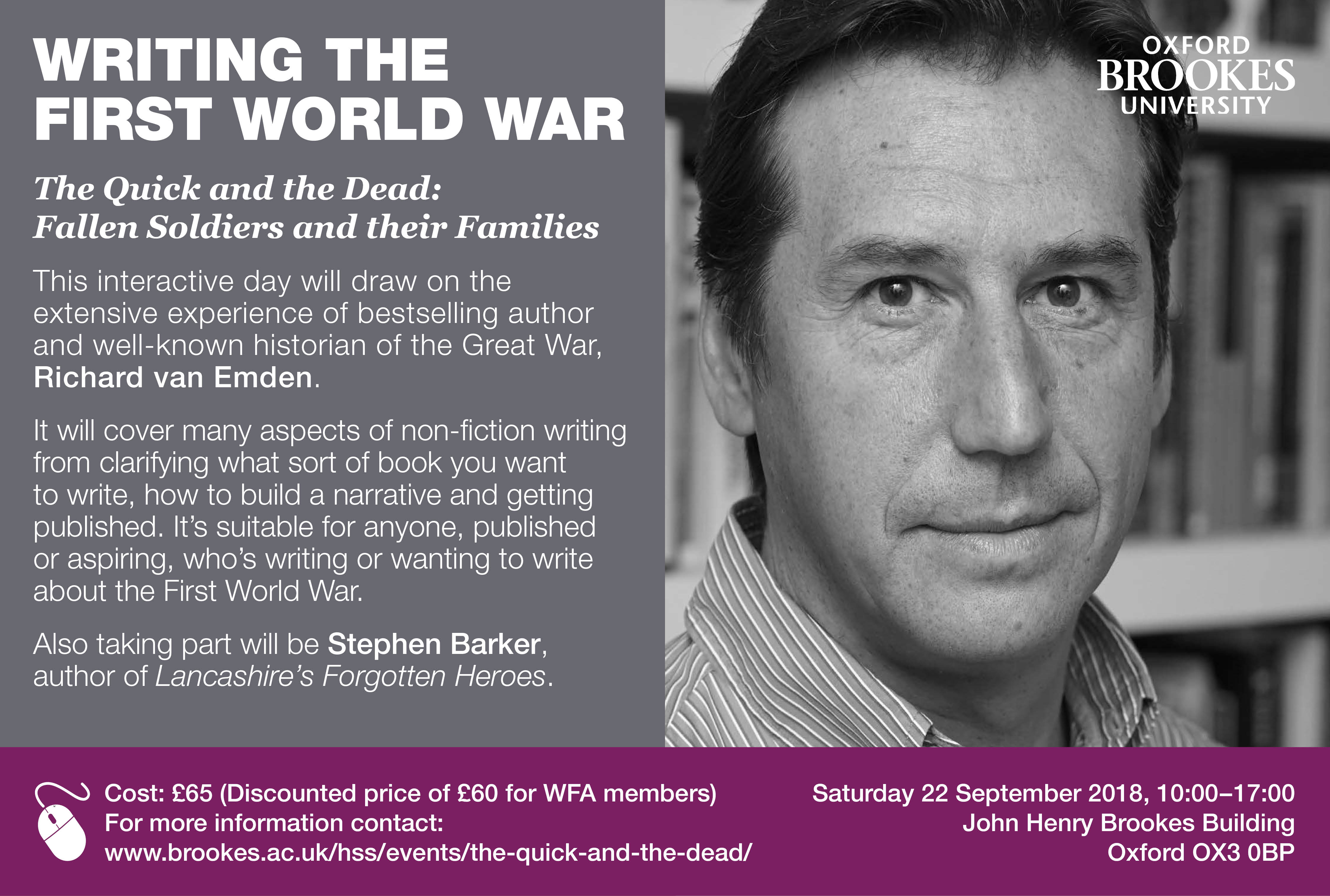 9:30-10:30: Panel 4: Labour Migration (Chair: Géraldine Vaughan)
Fabrice Bensimon (Université Paris-Sorbonne) – “British Labour and Migration to Europe during Industrialisation (1815-1860). The Case of the Lace Makers”
Yann Beliard (Université Sorbonne Nouvelle) – “Migration to and from Hull, and its impact on the labour movement, 1840s-1914”

2:30-3:30pm: Panel 6: The Empire and WWI: Canadians and Kiwis (Chair: Frédérique Spill)
Kent Fedorowich (University of the West of England, UK) – “The ‘Sawdust Fusiliers’: The Canadian Forestry Corps, 1916-1919”
Adam Cutforth (France-New Zealand Association) – “‘There and back again’: an ANZAC’s round-trip to the Western Front”

At the end of 1914 H. G. Wells published The War That Will End War, a collection of patriotic essays justifying Britain’s participation in the war. The title sounds familiar as it was taken up later on in other contexts, particularly by the British prime minister David Lloyd George and the American president Woodrow Wilson (‘the war to end (all) wars’).

With To End All Wars? the In Flanders Fields Museum (Ypres) and CEGESOMA (Brussels) once again return to this historic title for a multi-day conference, to tackle two questions: what were the consequences of the new geopolitical order installed after this so-called ‘last war’, and how is the legacy of both war and post-war order remembered up to the present day?

Taking worldwide perspectives, this unique and prestigious conference brings together international specialists including Jay Winter, Nicolas Offenstadt, Carole Fink, Stefan Berger, Bruce Scates, Pieter Lagrou, Piet Chielens and many others. They will discuss and reflect upon the consequences of the new geopolitical order that came into being after the First World War, and how that war and its legacy have been remembered up to the present day.

See here for full conference details and to register.

The study of warfare is often restricted to the sphere of military history and rarely allowed to transcend the artificial boundaries of historical study, namely those limited by geography and periodization. Throughout the ages war has had the greatest impact, not on the political elite who declare wars but on those who fight and die and their families and friends. This conference aims to address both the experience and impact of war for those fighting as well as for those on the periphery of combat.

Subtopics of particular interest are:
Women in war; the social stigma of retreat or cowardice; war and agriculture; the impact of scorched earth policy on populations; The depopulation of villages; war’s effect on birth or marriage rates of the loss of male citizens; prisoners of war; camp-followers and non-military personnel; displacement of populations; arms production; social security systems for war widows and orphans; the effect of training on a soldier’s mindset and actions (before, during and after combat); the social position of soldiers; peacetime relations between soldiers and civilians; wartime relations between civilians and occupying armies.

The conference is aimed equally at postgraduate students, researchers in the early stages of their careers and established academics. There are no specific geographical or temporal parameters regarding the subject matter of papers, and scholars of ancient, medieval and modern warfare are encouraged to submit proposals. We would also encourage the proposal of panels of three papers.

Proposals/abstracts should be no longer than 250 words and should be sent to:
Graham Wrightson (graham.wrightson@sdstate.edu)
The deadline for submission of proposals is August 31st, 2018.

The Defense Historical Service and the Zentrum für Militärgeschichte und Sozialwissenschaften der Bundeswehr, the Institute of War and Peace Studies (IHMC-UMR 8066, Paris 1-Sorbonne) are organizing on the 27th and 28th November 2018 an international symposium entitled “To cease fire, to cease hostilities? Since modern times to the present day.”

Over the last few years, the historiography of military history has benefited from a profound renewal of ideas, objects and methods in the wake of John Keegan’s works. Despite a growing interest in the surrender phenomenon (P. Vo-Ha) or in the experience of war captivity (F. Théofilakis, F. Cochet) and more generally in the fate of the vanquished (C. Defrance, C. Horel and F.-X. Nérard), the analysis of the end of hostilities still remains a blind spot. However, the organizers of the current conference are convinced that this problem is a particularly fertile prism through which the war object should be examined: The way we stop fighting says much about how the war is thought and waged.

Papers can be submitted in French or English.
Languages for the symposium will be French and English.
Please send us a 500-word abstract and a short bio by July 1st, 2018. Accepted speakers will be notified by July 15th, 2018.

The organizers of the symposium will bear the costs of:
– Travelling tickets, accommodations and catering for non-Parisians speakers
– Midday lunches

Sidónio Pais died on December 14, 1918, murdered in Lisbon. As a republican, he would successively occupy the positions of deputy, senator, minister and ambassador, returning to Portugal when the First World War was already predicted. In power by the conspiracy that established the “New Republic” (1917-18), he would lead a confederation of disgruntled republicans, monarchists, clericals and anti-war forces, and legitimize the presidency by elections, exercising a mixed power of authoritarianism and populism. His homicide left the country in great political, economic and social instability, aggravated by the Spanish flu, the Influenza A virus.

In the Azores, the year of 1918 was marked by the war in the sea; the Spanish Flu; the Azores Detachment of the U.S. Atlantic Fleet and the High Commissar of the Republic, General Simas Machado, was sent by the President of the Republic to control the civil, military and diplomatic areas in the archipelago. To this scenario were added the war in the sea, the TSF and submarine cables and the communication of the Armistice to North America; a German POW in Terceira island and a deep trade crisis, with big social misery, promoted in many cases by the action of hoarders.

This meeting aims to analyze the last year of World War I, with particular emphasis on the Azores in its relationship with the Atlantic, belligerence, economic crisis, communications and Atlantic ports, and international affairs with Sidonism and Franklin Delano Roosevelt. Likewise, 1918 also marks a year of profound reflection about the hygienic-sanitary conditions, and is even a starting point for the study of war traumas or morpho-functional sciences / biomedical engineering, to which we can ally the relevance of the female activism, with some echoes in the Azores.

The organizing committee calls for proposals that address, but are not limited to, the following themes:

The maritime and terrestrial dimension of the involvement of the Azores in World War I;
The naval and submarine war;
The Atlantic and telecommunications during the Great War;
The maritime connections in the Trenches War, or in the colonies;
The Sidonism and the High Commissioner of the Republic for the Azores;
Health services, health conditions and the Spanish Flu;
The Armistice and the return to normality;
Women’s Emancipation.