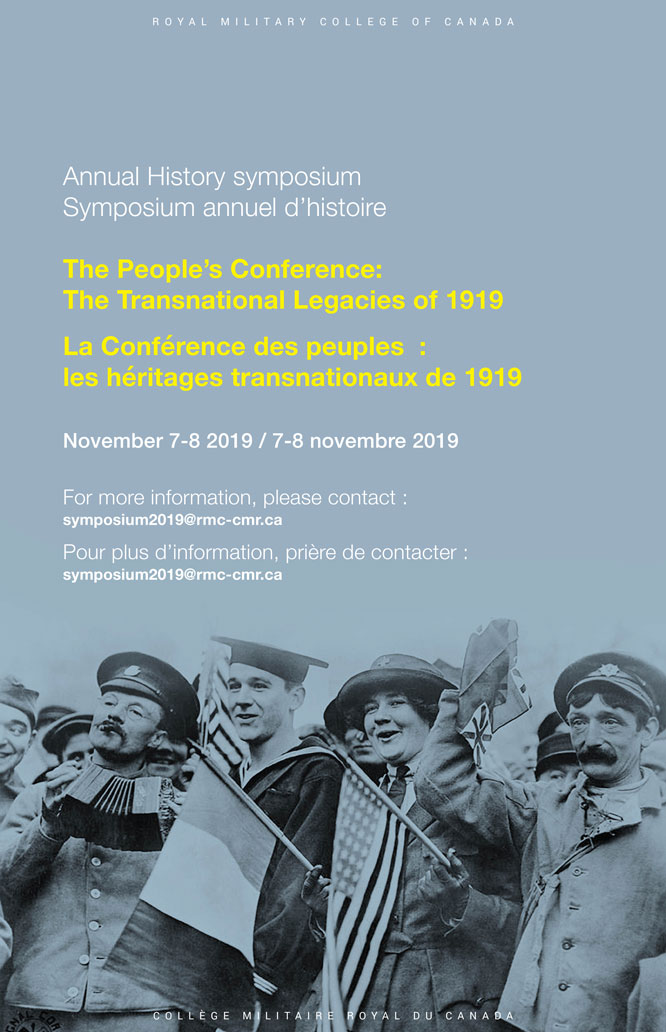 At the end of 1914 H. G. Wells published The War That Will End War, a collection of patriotic essays justifying Britain’s participation in the war. The title sounds familiar as it was taken up later on in other contexts, particularly by the British prime minister David Lloyd George and the American president Woodrow Wilson (‘the war to end (all) wars’).

With To End All Wars? the In Flanders Fields Museum (Ypres) and CEGESOMA (Brussels) once again return to this historic title for a multi-day conference, to tackle two questions: what were the consequences of the new geopolitical order installed after this so-called ‘last war’, and how is the legacy of both war and post-war order remembered up to the present day?

Taking worldwide perspectives, this unique and prestigious conference brings together international specialists including Jay Winter, Nicolas Offenstadt, Carole Fink, Stefan Berger, Bruce Scates, Pieter Lagrou, Piet Chielens and many others. They will discuss and reflect upon the consequences of the new geopolitical order that came into being after the First World War, and how that war and its legacy have been remembered up to the present day.

See here for full conference details and to register.

The Peace Conference held in Paris in the aftermath of the Great War remains among the most important yet also most controversial events in modern history. Although it is often considered to have made a second global war all but inevitable, it has also been praised for providing the basis for an enduring peace that was squandered recklessly by poor international leadership during the 1930s.

A major international conference will take place in Paris in June 2019 to commemorate the centenary of the 1919 Conference from a global perspective. The purpose of this event is to re-examine the history of the Peace Conference through a thematic focus on the different approaches to order in world politics in the aftermath of the First World War. A remarkably wide range of actors in Paris – from political leaders, soldiers and diplomats to colonial nationalist envoys and trade unionists, economists, women’s associations and ordinary citizens – produced a wide array of proposals for a future international and, indeed, global order. These proposals were often based on vastly different understandings of world politics. They went beyond the articulation of specific national security interests to make claims about the construction and maintenance of peace and the need for new norms and new institutions to achieve this aim. To what extent the treaties and their subsequent implementation represented a coherent world order remains a question of debate.

Paper proposals
The conference organisers aim to ensure the conference provides a global perspective on the Paris Peace Conference. We are therefore particularly keen to receive proposals from scholars working on topics pertaining to the non-western world.

The conference languages will be English and French
Regardless of language, all proposals will receive serious consideration.

The deadline for proposals is: 1 June 2018
Please send your proposal (abstract in English or French of no more than 500 words) and short CV to Axel Dröber: ADroeber@dhi-paris.fr.

We are inviting proposals for the panel ‘The Brest Peace Conference and the international relations in Central Europe (1917–1918)’, which will take place at the 7th International Congress of Belarusian Studies on 15–17 September 2017 in Warsaw, Poland.

This panel aims to demonstrate the research potential of the topic of international relations in Central Europe at the final stage of the Great War.

If you wish to take part in the panel, please submit an application form by 10 May 2017, including your paper proposal from 2000 to 4000 characters, following the link: https://palityka.wufoo.eu/forms/application-form-for-speakers-2017/

It is well known that the signature of separate peace treaties between the Central Powers and Ukraine and Russia at the Brest Peace Conference in February-March 1918 (and with Romania in May) helped the regional powers to build a new international architecture for Central Europe. However, this process substantially changed after the defeat of the Central Powers in autumn 1918. As a consequence, the traditional historiography pays most of its attention to the Entente policy (and the Paris Peace Conference of 1919), leaving many aspects of the brief Brest system of international relations ignored.

To fill this gap, the panel will invite researchers to address the following questions: How did the policy of the Central Powers develop in the context of the Brest Peace Conference? What was the reaction of revolutionary Russia to the end of war on the Eastern Front? How did the peace affect the national movements of Central Europe? What did the Entente undertake in response to separate treaties of its former allies (Russia, Ukraine and Romania)?

The working languages of the panel are English, Russian, Belarusian and Ukrainian.

The International Congress of Belarusian Studies is one of the largest event in the academic life of Belarusian researchers in Social and Human sciences, attracting a number of foreign colleagues and gathering up to 500 participants.

The horrors of the Great War and the desire for peace shaped scholarship in International Law and International Relations (IR) during the late 1910s—a stimulating time for both disciplines. Scholars observed and analysed political events as they unfolded but also took an active part, as governmental advisors or diplomatic officials, in devising the new international order. The Paris Peace Conference and the subsequent birth of the League of Nations as well as the Permanent Court of International Justice served as testing grounds for new legal and political concepts. The end of the First World War was in many ways a milestone for both disciplines, prompting scholars to reflect on the consequences of the war on society, politics, and the world economy. How could another world war be avoided in the future? How could states be held accountable for violations of international law? What were the preconditions for peaceful international governance? These questions led to pioneering research on issues such as arbitration, sanctions, revision of treaties, supra-national governance, disarmament, self-determination, migration, and the protection of minorities. At the same time, the study of International Law and IR also advanced in terms of methodology and teaching, including new professorships, journals, conferences and research centres.

A century later, it is a good moment to reflect upon disciplinary histories and revisit some of the theoretical and practical debates that shaped the period from 1914 to 1945. The workshop conveners are particularly (but not exclusively) interested in the following research questions:

Was the First World War a watershed moment for the development of International Law and IR?
Which were the key debates in both disciplines? And how can they be re-interpreted today?
What were the connections and/or dividing lines between the two disciplines?
Did International Law and IR evolve similarly across different countries?
Who were the principle actors, both individuals and institutions, in the respective fields?
Which role did International Law and IR respectively play in shaping ‘real-world’ policy? And to what extent were theoretical developments shaped by political events?
How did ideas float between academia and politics?
How successful were non-governmental organisations—such as academic societies, arbitration clubs, political pressure groups, League of Nations clubs, the International Committee of the Red Cross (ICRC), etc.—in achieving their goals?

The two-day interdisciplinary workshop will be held at the European Studies Centre (ESC) at St Antony’s College, Oxford, from 31 August to 1 September 2017. We invite abstracts from early career researchers and advanced postgraduate students in history, law, IR and other related disciplines to share their research in a multi-disciplinary environment. By facilitating this exchange we hope to open new avenues of research and to encourage new approaches to the history of both disciplines. We are planning to have six panels, one keynote address, and an open plenary session that allows all participants to pitch their research projects.

Please submit your proposal (including a title, 300 words abstract, and a short bio) to jan.stoeckmann@new.ox.ac.uk by 31 March 2017. Successful applicants will be notified by 30 April 2017. We are currently working on logistical details, including reimbursements and publication plans, and will keep you updated.