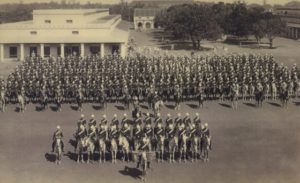 1916 was a significant year in the Great War. In Europe it was the year of the Somme and Gallipoli. In Africa it was the year of Salaita and the British allied invasion into German East Africa, the loss of Cameroon to the Allies and the subsequent use of West African forces in East Africa. South African forces detoured via Egypt en route to the Somme and in Ethiopia Menelik was deposed. It therefore seems fitting to explore how those living in Africa experienced the war, both in their own land and elsewhere.

Abstracts and proposals of up to 300 words as well as a short biography should be sent to: greatwarinafrica2014@gmail.com. This email should also be used for any enquiries related to the conference.

Poster submissions must be in English. They should include a 1 page abstract and a draft of the final poster. Please prepare your poster in either portrait or landscape format with the following dimensions: 82cm x 102cm.

Museum of the History of Science, Oxford

Dr Silke Ackermann shares personal impressions from her recent pilgrimage to Gallipoli, ahead of a screening of Gelibolu, the 2005 documentary by Turkish filmmaker Tolga Örnek. Presenting viewpoints from both sides of the conflict, the film is narrated by Jeremy Irons and Sam Neill.

The Museum of the History of Science’s season of Gallipoli films begins with All the King’s Men (1999), a feature-length BBC television drama starring David Jason about the mystery of Sandringham Company of the Norfolk Regiment, which disappeared in action at Gallipoli in 1915. Part of the Dear Harry exhibition programme.

Museum of the History of Science, Broad Street, Oxford.

On 25 April 1915, the Allied force launched amphibious landings on the Gallipoli Peninsular. The aim was to control the straits and capture Constantinople (now Istanbul), the capital of the Ottoman Empire. The Allied landings, which included French, Australian and New Zealand troops, were heavily opposed by Turkish forces and a trench warfare stalemate followed in extreme heat and appalling conditions. This eventually ended in a disastrous Allied defeat with over 250,000 casualties, including 58,000 dead. Turkish losses were heavier still.

These seven war memorials, are notable among the tens of thousands in every village, town and city in the country for their association with the Gallipoli campaign. Like all war memorials, they are tangible and poignant reminders of events a century ago.

A blog from Te Papa Tongarewa Museum of New Zealand highlights the role of Maori soldies that served at Gallipoli, as an introduction to their exhibition Gallipoli: the scale of our war.