The German Revolution of 1918-19 marks a historical turning point at which, following the catastrophe of the Great War, soldiers and civilians rose up to overthrow the German Empire’s political and military leadership. The approaching centenary offers a timely occasion to re-evaluate its contested history and memory by focussing on the socio-cultural realm of expectations, experiences and responses. The German Revolution was a key event in the era of seismic transnational upheaval which shook Europe between 1916 and 1923. An advanced industrial economy with the most powerful organised labour movement in the world, Germany was practically, strategically and symbolically critical to competing visions of the future in this new age of revolution. ‘The absolute truth’, wrote Lenin, ‘is that without revolution in Germany we shall perish’.

The conference proposes to re-evaluate the history of the German Revolution by shifting attention to the practices and agency of protagonists and stakeholders beyond the political elites. It seeks to explore the subjective dimension of the events and to investigate the diverse expectations, experiences and responses of Germans old and young, female and male, rural and urban, Catholic, Protestant and Jewish. For despite its evident significance as a historical watershed, the German Revolution remains poorly understood. Scholarship has made faltering progress since the historiography of the 1960s and 1970s, which concentrated on the constitutional and high political course of the revolution. While the notion that historians have ‘forgotten’ the German Revolution is no longer entirely accurate, it remains one of the least-studied transitions in European history.

The conference’s new perspective will register, among other topics, the revolution’s popular mobilisation and societal penetration, its impact on everyday life, its destruction of inherited patterns of authority, its generation of new affiliations, boundaries and cultural expressions, and its complex and contested legacy for the Weimar Republican project. It will establish an intellectual toolkit to analyse the creation, performance and experience of revolution and democratic citizenship, focusing on the dynamics of language, symbolism, practices, gender, emotions and mentalities.

While the focus of the conference rests on events between November 1918 and May 1919, we welcome contributions that critique this timeframe and situate the German Revolution within longer-term developments. By the same token, a comparative approach that combines different regional case studies, investigates the dynamics between centres and peripheries, and explores the impact of events in other countries, such as Russia, Hungary and Italy, on the German Revolution (and vice versa) will help to situate the events of 1918-19 within a broader European culture of protest, political upheaval and social change. We welcome interdisciplinary approaches.

• The creation and performance of revolutionary politics
• Patterns of political and cultural demobilization and remobilization in wake of the Great War
• Individual expectations and experiences in cultural settings such as the metropolis, small towns or countryside as well as in the virtual realm of media and the arts
• Revolutionary economics
• Gender and the German Revolution
• Paramilitarism and violence
• Protestants, Catholics, Jews and the German Revolution
• Different ideas of politics and social participation developed during these months in different contexts and by different groups of actors (including an analysis of their particular semantics)
• The impact of these ideas of politics and social participation on the longue durée history of democracy in Germany from the Weimar Republic to the fall of the Berlin Wall.

The organisers aim to secure funding to defray the travel and accommodation expenses of participants. Conversations are underway for the publication of contributors’ papers within an edited volume to be published as close as possible to the centenary.

The language of the conference is English.
Contact Info: GR2018mail@gmail.com
Please send proposals of up to 350 words and a brief biographical note by 1st November 2017 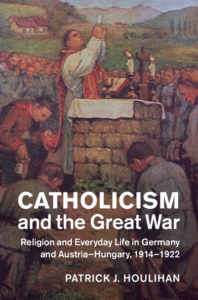