The event is open to all, but registration is required: http://www.ccw.ox.ac.uk/events/2017/7/10/t-e-lawrence-the-fall-of-aqaba-global-war
There will be a small fee for non-students, but students will be able to attend free of charge. Please note that lunch is not provided, although there will be some light refreshment. 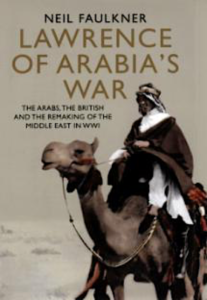 Jeremy Wilson, who has written extensively on the life and letters of T.E. Lawrence, including Lawrence of Arabia: The Authorized Biography of T.E. Lawrence, gave a lecture in May 2015 at the Institut d’Etudes Avancées in Paris. A recording of the lecture is available here.

Workshop organised by Mary Bryden, fellow at the Paris IAS

During the current Centenary of the First World War, we are commemorating the first mass industrialised war. If the number of victims was unprecedented, so too was the manner in which this quickly became a literary war. Amongst those caught up in the conflict were many who wished to describe this radical break with normality. Some of these narrations appeared in the course of the conflict itself, while others formed part of the second wave of war literature, between 1929 and 1930. The prevalent literary model is that of the muddy fields and trenches of the Western Front. However, this journée d’étude will concentrate upon the Middle Eastern Front and, in particular, on the person of T. E. Lawrence, whose war book Seven Pillars of Wisdom describes his participation in the Arab Revolt from 1916 to 1918.